A graphical representation of the Arecibo message, humanity's first attempt to use radio waves to actively communicate its existence to alien civilizations 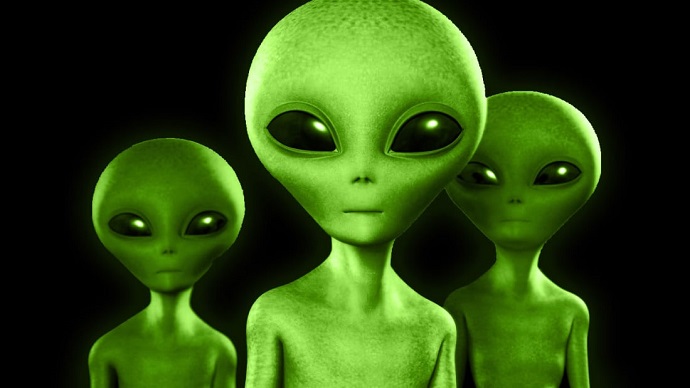 The Fermi paradox, or Fermi's paradox, named after physicist Enrico Fermi, is the apparent contradiction between the lack of evidence and high probability estimates for the existence of extraterrestrial civilizations. The basic points of the argument, made by physicists Enrico Fermi (1901–1954) and Michael H. Hart (born 1932), are:

According to this line of reasoning, the Earth should have already been visited by extraterrestrial aliens. In an informal conversation, Fermi noted no convincing evidence of this, leading him to ask, "Where is everybody?"[ There have been many attempts to explain the Fermi paradox, primarily either suggesting that intelligent extraterrestrial life is extremely rare or proposing reasons that such civilizations have not contacted or visited Earth.

There is no Fermi's paradox, and aliens only exist in movies.

Even if life exists, or existed, elsewhere in the universe, there is a high probability it will be, or was, wiped out by a natutal or unnatural catastrophe like climate change, a virus, hit by a large meteorite, or it destroyed itself with nuclear or chemical weapons, was overtaken by artificial intelligence, or whatever.

Because the fastest rate at which information can travel is limited by the speed of light [show speed of light on screen 299 792 458 metres/sec] , if an intelligent civilisation was say 100 light years away from us and sent out a signal, it would take 100 years to get here, and were we listening or looking in the right place?....and would they have even bother to send out a signal? What would that signal be anyhow? Plus the intensity of any signal falls off like the inverse of the distance squared [show ~1/r2 on screen], so if they were so far away it would be too weak to detect.

For an alien civilisation to actually visit us is just impractical as space travel is only possible at speeds much less than the speed of light. A typical space craft can travel at about 40,000 km/hr, whereas the speed of light is about 1,080,000,000 km/hr.

Our nearest comparable galaxy, the Andromeda galaxy, is 2.5 million light years away. So it would take 67.5 billion years to travel from there to here at that speed [show this number on the screen, flashing would be good]......and that is our nearest galaxy, and what if there is not life there at all. And let us point out that is is longer than the current age of the universe, which is about 13.8 billion years.

It is safe to say that we will never see aliens.

Forget about alien visitors. Period. They can never get here. We would be lucky to even communicate with aliens in any meaningful way either. An exchange of “hello's” travelling at the speed of light might take something like a few hundred to thousands of years.

But, what about worm-holes? They are tiny....a billionth of a billionth of a trillionth of a millimetre is size and we just cannot fit through them.....if they even exist, and where would they take us, would it be any closer to other life?

And you can forget about Star Trek's warp drive or space warp generator. you need a massive celestial obect to do anything crazy like that. No way. Not possible.