Other research interests and expertise

sorry for the scant (or lack of any) details in some places. that's because i no longer (or do not have much time to) work  in some of these areas 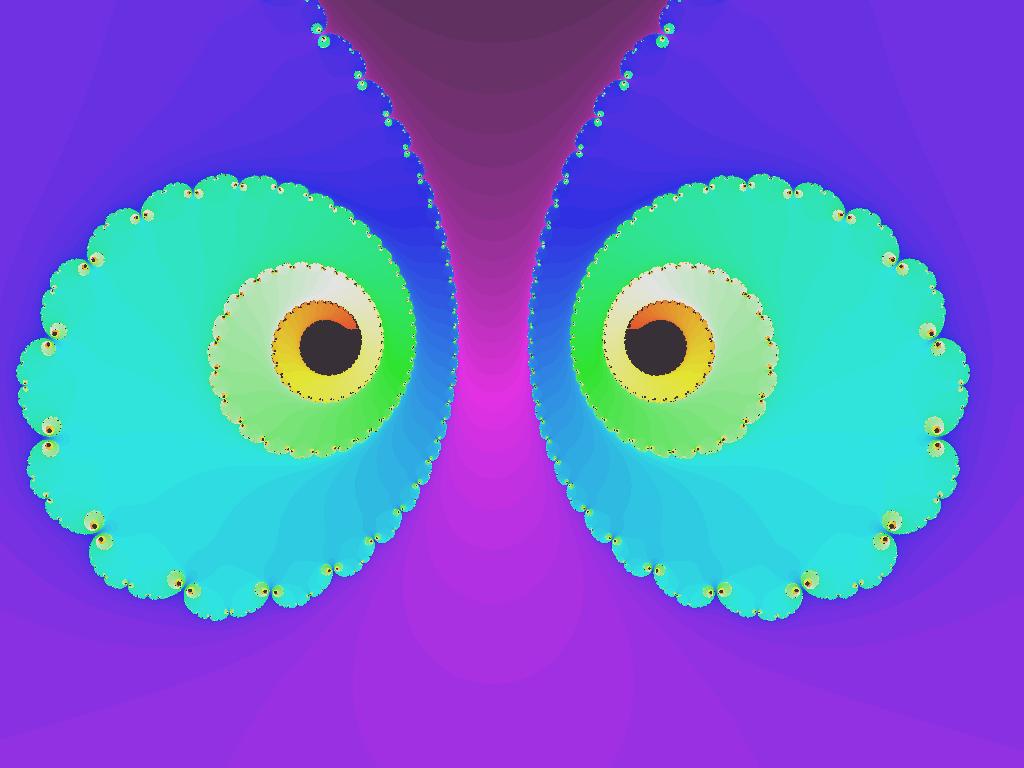 A fractal is an object which looks self-similar on all scales.  If we examine a fractal under a magnifying glass (of any strength) we essentially see the same structure, with the same amount of roughness.  In the picture above the 'eyes' repeat themselves inside the picture ad infinitum.  Examples of fractals in reality are the intricate network of blood vessels in our bodies, the shape of clouds, the shape of a pine tree.  in fact most things are fractal as opposed to geometric.  One of the most interesting features of a fractal is that it seems to have a non-integral or fractional dimension (hence its name).  Although a single segment of a blood vessel has dimension one (corresponding to a line), the network seems to uniformly protrude into a 3-dimensional space.  [Interestingly, there is no cell within the human body which is more than a few cells away from a blood vessel.]  The effective dimension of a network of blood vessels is somewhere between one and three.

Chaos theory is the understanding that some things we cannot understand, even if the underlying mathematics is understood.  This is especially true of iterative systems.  One of the most interesting features of chaos (or pseudo-random behaviour) is that if we start with two almost identical states then the difference between these states increases exponentially fast until the two almost identical initial states have evolved into two entirely different states.  Examples of chaotic systems include the weather, and mixing cement or cake mix.  You may observe this phenomenon the next time you mix a cake or cement.  Notice how two nearby particles of cake mix drift apart rapidly, but then almost come back to the same spot (notion called a 'strange attractor').  Chaos and fractal go hand in hand.  There is lots of stuff on the Internet on chaos theory, so I won't say much more here.

Nature has solved many complicated problems in the course of evolution.  We can use these same ideas mathematically to solve complicated optimisation problems.  I am looking at applying this technique to solve some real world problems. An example is setting the football fixtures (see below).  I supervised a PhD student in this area.

These are like genetic algorithms except that information is processed somehow before it is transmitted down the line.

self-organizing and adaptive systems (other than the brain)

This subject is of interest to me but haven't really done much in this area as yet.

lots of my own ideas

I won't go into this stuff here, such a long time ago, too much to say and I have really moved on.  One of my main achievements was being invited to write a Physics Report on "Chiral Symmetry and the U(1) Problem".  This received a lot of attention after Nobel Laureate Gerard 't Hooft wrote a whole physics report to counter one little negative thing I said about his work.  I claim that instantons do not solve the U(1) problem (a famous problem in particle physics) because people where using the wrong chiral symmetry charge operator.  In his article 't Hooft refers to people by name except that I am referred to as reference 7, even though I appear a few times on every page. I would have to say that we still agree to disagree.

- bound on the number of leptons and quark flavours

We simulated a polymer chain with 320 beads on a slow VAX computer, while someone in Canada on a Cray was only able to simulate a polymer with 32 beads.  Later I was able to simulate 64 polymers in a box.  I did the programming and thought of most of the fast algorithms, even though when I was hired I had no programming experience.  I recall in those days that we sue to get a bill every month for the amount of CPU and disc space we used on the mainframe.  Most people would receive a bill of around $20.  After a few months in the job, I was running up bills of hundreds of thousands of dollars and soon millions of dollars each month (don't worry it was just funny money).  In the end the computing centre had to abandon its billing system because they could only handle 6 digit figures.

Over the last few years I have become interested in applying mathematics to sport (just for fun - actually everything i do is just for fun).  Here are some of the things I have thought about in my leisure.