Over the last 4 years I have helped set the fixtures for the West Australian Football League (WAFL), the premier football competition in the State of Western Australia.  This  problem is made difficult by the fact that each of the nine teams in the competition must play 10 home games and 10 away games with 3 byes in 23 rounds (sometimes 21) and each team wants to have an alternating sequence of home and away games, plus some other desirables.  For example,  Peel would like home games on long-weekends.  The WAFC also imposes a number of constraints, such as, certain teams must play 3 times whereas others play only twice (eg South Fremantle and East Fremantle must play 3 times and on the same for West Perth and East Perth (the local derbies).  The number of constraints are so numerous that they cannot all be satisfied.  In the past three years I have set the fixtures by hand 9using diagrams and clocks) but a much better way to do it would be to encode the fixtures on a "chromosome'.  Doesn't have to be a particularly good set.  And then construct many such solutions and allow them to mate and evolve inside a computer program, with lots of 'sex' and a little mutation, keeping only the fittest (best) individuals with each generation.  Eventually this should lead to a good set of fixtures. 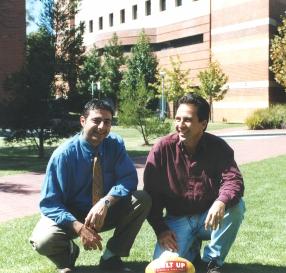